As the Southwest Airlines commercials used to say,

"You are now free to move about the country."

I got my passport in the mail yesterday; it came much faster than I expected. The state department website said processing would take 4-6 weeks, but from the day I went to the post office and filled out the application until yesterday when I received it in the mail, it was only 12 days!

I figure they're processing the New Mexico applicants faster because no one knows how long a New Mexico drivers license will be sufficient to get on an airplane, even for domestic flights, or go into a federal building, etc.

We can thank the New Mexico Legislature for refusing to repeal the law that allows illegal immigrants to get a New Mexico drivers license. That means our state (as well as 36 others) is not in compliance with the Homeland Security's Real ID Act. Homeland Security keeps granting extensions, but they've been doing that for years and they're not happy about it. Previously, they've granted extensions for one year, but this time (in January) they wouldn't say how long the extension will last.

I have to say, I was very impressed with how fast I got the passport. It's even a halfway decent photo of me (and I hate most photos of me), courtesy of the friendly postal employee. 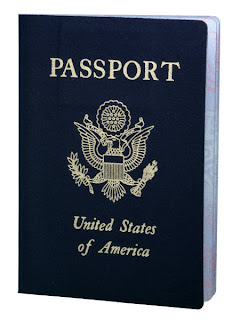 When Pope Benedict was elected Pope nearly eight years ago and announced he would take the name Benedict, I was pleased. After all, the college I went to was founded by the Benedictine monks.

But in the days since he announced his resignation, every time I see the name "Benedict" I get a strong craving for Eggs Benedict! 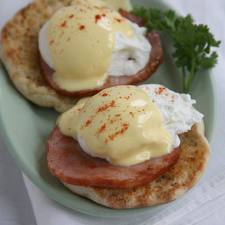 It's definitely not a healthy item, but it sure tastes good, so having it every once in awhile is OK.

In a not-really-related matter, the other Night Auditor at the hotel where I work is named Jesus, although it's pronounced in the Spanish way of Hay-Zeus. I have his name in my cell phone because we sometimes talk about the schedule, and it's always a shock when my cell phone rings and I see that Jesus is calling!
Posted by Beth at 8:05 PM 4 comments:

The Heavenly Warmth of Twenty Degrees

Twenty degrees never felt as warm as it did this afternoon. It was 2:15 and I went outside; it was twenty degrees, but the sun was shining brightly and it actually felt warm. It was a much different sensation than at 7:30 this morning when it was minus 22 degrees!

It's just the latest in a stretch of extremely cold mornings, with no end in sight.

And all of these mornings have been days when I worked overnight at the hotel, meaning I'm driving home when it's the absolute coldest, about 7:15 a.m.

I start my car early and go back inside to let it warm up, and going the few steps from the hotel to the car and from the car to the house isn't that bad, as long as I'm bundled up. But Wednesday was trash day, and in the three or four minutes it took me to roll the trash can to the curb, my face got so cold, I couldn't believe it happened that quickly. I was wearing gloves and a coat, of course, but my face was exposed.

We had to laugh last night when we watched the 10:00 news. The weather guy predicted Taos would have a low of minus 4 and it was already minus 12!

Someday Spring will come. Heck, someday it will get above freezing.

In the meantime, I'll go outside in the afternoon when the sun is shining and revel in the warmth of twenty degrees.

Our Own Private Dust Bowl

We watched "The Dust Bowl" by Ken Burns on PBS November 18 and 19; it was one of his best films since "The Civil War" if not the best. If you didn't see it, you should find a way to watch it. It's available for download on iTunes or you can buy the DVD or Blu-Ray at PBS. You can watch the trailer here.

What those people had to go through was unimaginable. We complain about the dust that constantly filters into the house, but it's nothing compared to what they had to deal with. The dust outside the houses piled up in drifts as high as the roof. And the dust invaded their bodies, filling their lungs, causing illness and many, many deaths. We complain about the wind that blows all through the month of April, but at least we don't get the "black blizzards" that they did. And it went on for 10 years, the storms growing more frequent as the years passed. No one in Washington, DC seemed to care about the situation, until the "Black Sunday" storm, which eventually blew the dust into New York City, into the Oval Office in the White House, and onto a ship out at sea. Finally people back east took notice and they started up programs such as the CCC and the WPA, which put people back to work, doing productive things that the country needed, such as building roads and bridges. The government also sent people to the dust bowl area to teach the farmers other ways of plowing that wouldn't harm the environment as much as the way they had been doing things. Gradually things got better and the dust storms stopped.

The "center" of the dust bowl was Boise City, Oklahoma, which is in the far western panhandle of Oklahoma, very close to the border with New Mexico.

The dust bowl was long ago, but it could happen again; sometimes it feels like it is happening, or at least starting to happen. No one is plowing the ground under, but we're in severe drought conditions and have been for years.

Ron and I were talking about it last night and we couldn't remember the last time it rained here. So we checked the handy-dandy weather station and saw that a month ago, we got a quarter of an inch of rain. The last "significant" rain we got was on September 12 when we got 0.68 of an inch.

We've only gotten 6.39 inches of precipitation this year, which I knew was extremely low, so I compared it with the precipitation totals of all the years since we got the weather station and created this graph. 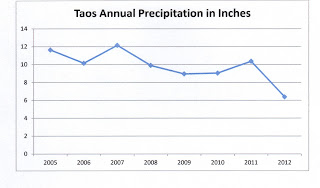 As you can see, it's been a very dry year. Granted, the year isn't over yet, but we're not going to get very much precipitation in the next three weeks. There is supposed to be a storm here this weekend, with snow, but we won't even come close to what we got in our very driest year.

And of course a dry winter means less snowmelt in the spring, which makes for a very bad fire season next summer. Sigh.
Posted by Beth at 7:07 PM 2 comments:

It's been hard on the cats, especially the strong-willed Satchmo. He's used to getting his dinner between 4:30 and 5:00, and this afternoon when he started yowling, I looked at the clock and said, "Hey, it's not dinnertime; it's only 3:30." Then I realized that for him, it was 4:30. I waited until 4:15 human time to feed them, giving them a gradual change. Of course I was outside between 3:30 and 4:15, so I didn't have to listen to his incessant yowling.

Ron fed the dogs a little earlier than usual, too, but they're not as vocally demanding as the cats are; it's just another gradual transition.
Posted by Beth at 5:08 PM No comments:

Well, not too often. Only once per election. But if you can, vote early. We're fortunate to live in a state where early voting is encouraged. I've been voting early for years. Ron always preferred to vote on election day, going to our neighborhood polling place, and seeing some of the neighbors. But this year he decided to vote early, hoping it would stop some of the political phone calls we've been getting almost nightly.

So we voted today at the county administrative building, where early voting is held for all county residents, no matter what precinct they live in. Business was steady, with three or four people in line all the time.

It feels really good to have voted. Go vote, quick before they make it more difficult.
Posted by Beth at 8:43 PM 1 comment:

On Friday morning we had 12 tons of "clean fill dirt" delivered so we could do some home maintenance. 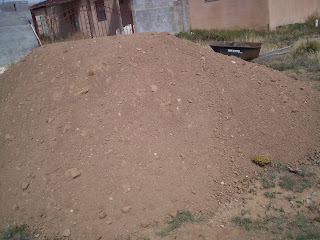 We had to put some all around the base of the house in the back courtyard, and also the two back porches, creating a slope so the rain that flows off the roof and the porch overhangs would flow away from the house instead of toward it, which would damage the foundation.

So we spent a few hours on Saturday and a couple of hours on Sunday doing just that. 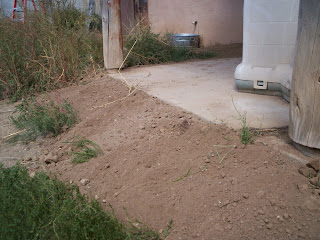 And we're almost done; we still need to finish up a little bit next weekend. And we'll still have plenty of dirt left over for future projects. 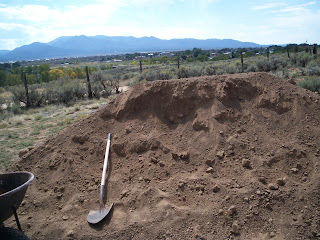 Today while we were working, the next door neighbors had two of their horses in their yard keep us company. One of the horses is the loudest, most talkative horse I've heard since the horses in the movie "Young Frankenstein."

Except the neighbor horse was MUCH louder.
Posted by Beth at 8:29 PM 1 comment: